Well, here it’s Wednesday again, and we are leaving for another country tomorrow. The last 8 days felt slow, but went so fast. I am just starting to acclimate and love the amazing city of Budapest, Hungary.

It is interesting that none of us three had been affected by the time changes very much or culture changes either for that matter until we arrived here. We had very few issues in Lisbon, a bit more in Disneyland Paris, and many more here in Budapest it felt like. It felt like a daunting task to be here and now I am sad to leave as it feels as though I have just let the realness of the city in.

There were a couple of reasons that it was hard to get used to being here. The first was the jet lag. For some reason, all of a sudden, the time changes caught up with all of us and the hour difference in time from Lisbon, set us back a couple of days. All three of us struggled with exhaustion, crankiness and headaches the first three days we were here. It was really a bummer, we thought that our mutant powers made us invincible to jet lag.

Secondly, it was the language. Hungarian is…well…a really foreign language. There is no connection to any other words that I know unless they are words that we all have transferred from another culture, such as buffet or manicure. But it took me this whole week just to master saying köszönöm, which means thank you. Its a tough language to understand and speak, I wish I had had more time to practice.

Third, the food here was just okay. We did find some great restaurants, such as a bavarian place, a vegan place, and a buffet that were really good. But these were all not really hungarian places and I am not much of a soup person so I didn’t even venture to try the Hungarian Goulash (I know…shame on me). I will write more in my Friday post about the wonderful restaurants that we did find and love.

Fourth, and last, the prices here are much higher than we expected. Mind you we have been blinded by the wonderful cost of living in Portugal, so it is probably not as bad as say, Paris or London, but it was a bit more expensive for the things we love than we had planned. For example, in Lisbon I paid 20 Euros for an exciting new haircut and here I just had to pay 32 Euros for a trim. (I chopped off all my hair and now sport a pixie cut..who would have thought I could have pulled it off?! But I love it!). Also the food costs her are significantly more than I am used to, about 30-40 euros a meal. It really isn’t that bad, I know, but my stupid expectations get me every time. 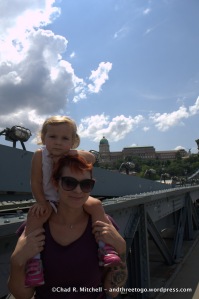 My New Haircut and Zoë on the Chain Bridge in Budapest

Now, after I have said all these things, I want to tell you that I love Budapest, I love the architecture, the weather has actually been sunny for 4 out of 8 days we have been here, and the people are very helpful and friendly. I want to come back and experience some more. Until next time Budapest… viszontlátásra (good-bye)!

2 thoughts on “Wednesday Write-Up: So the Days Float Through My Eyes”