The In-Betweens
By Chad (filling in for Jenny)

A thought occurred to me during our travels, one that had entered my head before, and one that I continue to have. It was a small nagging realization that the best parts of travel are not the monumental, nor the breathtaking, nor the phenomenal.

Instead the best parts are those that almost go unnoticed; the little moments that if left undocumented, probably get forgotten.

The chime of the 7-11 door, the blistering cold from the AC, and the sing-song sound of what sounds like “Good Morning,” but is in reality “Huānyíng” (欢迎), which means “Welcome,” was what stirred my memory. I had completely forgotten about this very mundane part of every day in Taiwan (trust me, every day in Taiwan is filled with 7-11 visits…). It was the greeting, the little sing-song sound, that made me smile and remember the conversations with fellow English speakers about it not being Good Morning… Especially in the middle of the night…

This moment gave me pause to reflect on all that we have done in the last few months. So many amazing moments, sights seen, and adventures had. So many moments that are forever etched into my memory, and will be shared with story and visuals on countless occasions until I am sick of telling them.

But what about those I had already forgotten, or the little memories that will come flooding back when least expected? I glanced through our picture collection, the many thousands of moments captured, and the select few that made up the blog, and the Flickr account. In-between all the pretty beaches, great castles, and Z’s smiling faces were the blurry nothings and the hastily snapped who-knows-what-they-were… But there were a few that brought back the memories already almost forgotten. 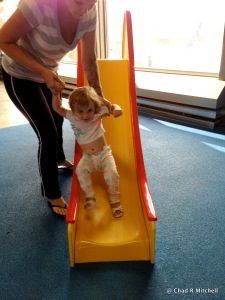 Thankfulness for a children’s playground is something you learn quickly while lugging a toddler around the world. Somewhere safe for them to play, and to burn off their excess energy, while you sip a coffee and reenergize… well it’s more than a blessing, it’s a lifesaver. One of the first I was thankful for was the small little playground in Germany, in-between flights, and in the very clean airport. I had almost forgotten about Z in her little pajamas, so excited to see some toys after being locked in plane after plane…

Fast Internet, good coffee, and being able to sit outside while working. These are three things I treasure on this trip and I almost take for granted. The ability to work in my pajamas on a bed is great, but I had almost forgotten how nice it is to sit outside and sit upright while getting the job done. I need to start doing that more often.

In-between the places we’ve loved are the places we’ve crashed for a night or two. The short stays where we don’t even bother unpacking our bags. This place was all right, the host was very nice, but it wasn’t much more than a bachelor pad. But it had this window, and it looked out over the sidewalks below… and you could hear the diners eating at the outdoor eatery, quietly chatting, glassware clinking, and light music playing in the background. Jenny had this dream to sit in the window, despite my panicky fear of heights, and she fulfilled her dream. It was almost magical, the wine, the alone time with Zoë sleeping peacefully. It was almost as if we were two young vagabonds with not a care in the world… 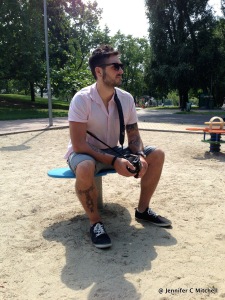 In-Between. The camera resting as it should.

These are three very in-between moments, of things that I fortunately had pics to remind me of… It almost makes me sad to go through my pictures and realize that most of what was visually captured are the moments I will never forget, despite the reminders.

I do want to remember it all, but the in-betweens are forgotten until something internal awakens them. The thought that a hidden treasure of memory awaits the right key to unlock it is like waiting for an eventual present. At any time a sight, smell, or a sound could bring these memories back. That is worth waiting for, and being truly excited about.