Today we took Zoë to the doctor and got confirmation that she does indeed have heat rash (10 days now, I hate seeing my baby uncomfortable). The doctor gave Zoë a prescription of steroid cream that seems to be working well. Poor thing was up most the night last night scratching, hence the doctor visit. I love visiting a country where we can see a doctor and get a prescription for a total of about $25, but that is a topic for another day.

Since Zz was feeling better and her rash seemed to improve after applying the cream, we decided to take her to the Taipei Zoo.

When Chad and I lived here five years ago, we ventured to this wonderful zoo three or four times. We loved it and when we returned here, one of the things we were looking forward to was taking Zoë to experience it as well.

The Taipei Zoo is located in the Muzha district of Taipei, you can take the metro to the terminal stop on the Taipei brown metro line. The “Taipei Zoo” metro stop drops you off within a 2 minute walk of the zoo entrance. You can also take a taxi, but the metro is much cheaper and actually very comfortable.

We took the metro, or “choo choo” as Z calls it, and landed at the zoo this afternoon. It was raining at our house, but the weather there was beautiful and sunny. This is typical for Taipei, the storm clouds seem to pick one area and stick to it on any given day, I was glad that the storms left the zoo area alone today. We all needed some time out of the house.

Zoë was very excited to be going to the zoo, and became even more excited as she walked past the metal sculptures of animals on the way to the entrance.

We paid our admission fees (60 NT a person, but it was buy one get one free for adults, and children under 6 are free, so we paid about $3 to go to the zoo!) and entered the park.

Immediately, all three of us noticed the children playing in a fountain type water play area. We took Z’s shoes off and let her run around in the water for some time. It was a great way to cool her off before we started to walk around and see the animals. She had a blast. Not only did she have fun, but there seemed to be a Zoë fan club going on as well. There was literally a line of people waiting to take their picture with the little Wàiguó rén (foreigner). At first we relented and felt even honored, and then it got a bit crazy (probably dating myself, but think of the NKOTB fans and how they would have felt getting a picture with Jordan) so we stopped it. It felt a little like Zz was an animal in the zoo that everyone came to see and we both were worried that it would make her scared or something. 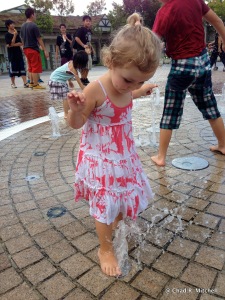 Zoë playing in the fountain

After we dodged the fan club, we started walking around the park. The wonderful and beautiful thing about the Taipei Zoo is that they have built it utilizing the existing landscape. The jungle that surrounds the zoo is part of the zoo. It is luscious and green and makes it fun to walk from habitat to habitat.

The park is large and we knew that we wouldn’t be able to see it all in one day, especially since we were being careful to keep Z cool and not exacerbate her heat rash.

We checked out the panda’s (which are way cuter in real life), the koalas, the elephants, hippos, tigers, and the list goes on. Zoë loved just stopping to watch the animals and also to pick up leaves and clean the ground with them. She definitely takes after her mama, a bit on the obsessive compulsive side. 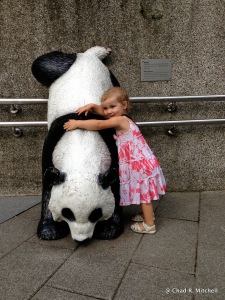 Zoë cleaning the handrails with a leaf
(c) andthreetogo

We left as the call went out that the park was closing. We left much of the park to see for another day, but with such inexpensive entrance fees, we figure we will take Zoë back numerous times during our visit to this great city.

As we left, we again had a crowd of people following us, asking to have their pictures taken with Zoë (Justin Beiber, you have obviously been replaced in Taiwan). We kindly declined the pleas as the line of people was getting rather long to get a snapshot with her. We ran to a taxi and headed home, the metro just felt too long a trip after running around all afternoon.

Whether you have kids or not, the Taipei Zoo should be on your must do list when you visit here. It is a wonderful way to spend an afternoon, a day, or whatever time you can give it. I promise you it will be time well spent!

4 thoughts on “Terrific Day at the Taipei Zoo”