When we set out on this trip, there were two promises that we made to Z, the first was that we would see real monkeys in the wild, and the second was that we would see and ride on elephants. This week, after almost 8 months of traveling, we finally made good on one of our promises. Luckily Z is a patient little girl, she didn’t even hold the long wait it against us.

We had heard of a place called Hua Hin Safari and Adventure. The brochure showed elephant trekking, an elephant show, a cobra show and a crocodile show. It also offered ATV tours through pineapple fields. It seemed to be reputable and the animals well cared for, so we decided to drive up there ourselves.

We queued up our Google Maps with the address that was given on the internet. And this was yet another lesson to us that you cannot always trust what is on the supposedly infallible interwebs. As we pulled up to a place called Elephant Village, we realized that we had fallen for an old Thai ruse, this was same same, but different I guess to what we had originally wanted.

As we walked up a kind lady gave us the details on what was offered at the Elephant Village. They offered elephant treks for either a half hour (600 baht) or an hour (1000 baht). Besides that they would let you meet and take as many pictures/videos with their baby elephant as you wanted for free… well the baby elephant worked for tips, which he happily grabbed from Z’s little hands. The elephants all looked happy and healthy (at least they didn’t seem lethargic or have sores or anything, that is the extent of my knowledge of elephant health) and the larger older elephants seemed to be roaming freely in between taking tourists on their treks. The baby elephant was also free when his trainer was with him, but I noticed that later on they had him chained on a pretty short tie down, which made me sad. I probably wouldn’t have given the establishment our business if I had seen that to begin with.

We chose the hour-long trek and Z and her Nana went on their first elephant ride together, with Chad and I following behind on our own elephant. It was pretty canned and touristy, but it was still a great time. I, of course, had to ask the “trek guide” a million questions and learned that each guide takes care of and rides the same elephant every day, in fact they consider the elephant a part of their family and each guide lives in a small village next to the business. The only part that I didn’t like about the trek was that midway through they stopped for a few minutes “to let the elephants rest” and try to sell us overpriced plastic jewelry.  In fact the trek guide on Nana’s/Mom’s and Z’s elephant handed our two-year old daughter a couple necklaces and a bracelet which she thought he was giving to her. Subsequently she had a slight melt down (understandably) when we told her she had to give the “gifts” back. That was a bit upsetting, but we all got over it, Z much quicker than me. We arrived back at the starting point and alighted from our lovely new friends. Then we were served cold water and fresh pineapple and given a chance to buy framed pictures they had taken of us along the trek. The pictures were not that expensive at 200 baht, but after paying 1000 baht per adult for the trek and the 300 baht for an elephant necklace (I know, we totally caved in the end… not my proudest moment), we didn’t feel like giving Elephant Village anymore of our money.

Z and I with the baby elephant 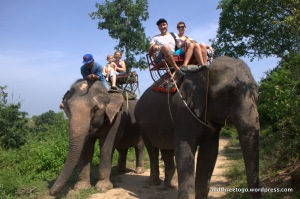 We still really wanted to check out Hua Hin Safari and Adventure, so the next day we made sure that we had the correct address and trusted Google Maps to get us there yet again. We drove to a road that was actually about 5 minutes from our house, there was a huge sign and everything… I really couldn’t believe we hadn’t seen it the day before… sometimes my powers of observation surprise even me.

As we drove down the muddy road, mom joked that this was the safari part of the name and there really was no Hua Hin Safari and Adventure. I was just starting to think maybe her joke would become reality when we came to a ramshackle old ticket booth with a couple of guys sitting in it. As we rolled up and I yelled out the car window asking if we had arrived at our destination, they said to follow them. Both of them hopped on a scooter and led us far into the country south of Hua Hin to the actual location of the park. We all talked about how anywhere else in the world, we probably wouldn’t have just followed a couple of guys into the wilderness so willingly, but they seemed trustworthy enough.

As we tumbled out of the car, a gentleman in a nice new uniform greeted us and showed us into the ticket area. He was helpful and gave us the prices. We had called and they had told us 600 baht for the elephant show, only to be told once we arrived that they no longer sold the show tickets separately and we would have to pay 1300 baht per adult to see the elephant, cobra, and crocodile show. My goodness, how quickly prices change in this economy. We decided to suck it up and pay the exorbitant price. While Chad and Mom were getting the information and paying the man, Z and I were playing with their little pet monkey. No, that is not a typo… We got to play with a tiny monkey named Omo. It was so much fun for Z and I, and amazingly they didn’t charge us for that, so obviously we were the real winners of the day.

We had about 45 minutes before the shows were to start, so Chad and Z went on an ATV tour of the pineapple fields (that only cost 900 baht). Mom and I walked around the perfectly manicured landscaping and “huts” selling ice cream and chatted while we waited.

After Z and Chad returned from their off-roading we all went to watch the elephant show. All the elephants were young (between 3-9 years old) and seemed to be well-treated (again to my very inexperienced eye). They played soccer, basketball, and painted. As each elephant finished their task, you were kindly given the chance to buy a big bag of bananas for 100 baht (I think I probably should have just given them my ATM card and pin) and feed them as a reward to the elephant for a job well done. We of course bought some bananas, because who are we to argue with something that is obviously the norm. 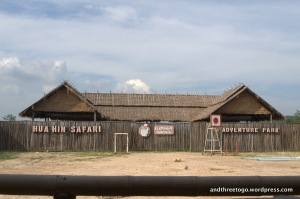 The highlight of the show was when I got called from the crowd to be in the show. I must say I was a bit nervous as they had me lay on a mat on my stomach, covered my lower half with a blanket and led an elephant to stand right above me. I waved at the crowd and flashed a confident and excited smile as the elephant started to massage my back and legs with his trunk. I started to relax and enjoy my free (haha that’s a laugh) Thai elephant massage, when all of a sudden the elephant started massaging me with his foot. My life flashed before my eyes and I gave a thumbs up to Z, hoping that seeing her mother crushed by an elephant massage wouldn’t scar her for life. After a few moments, the elephant stepped over me, took a bow, and I was helped up and stoically made my way back to my seat. Z cutely asked me if I was ok, and since I was (Thank God!) and we finished watching the show.

From there we went on to see the cobra and crocodile shows, which were honestly pretty unremarkable and not too interesting. Well, except for seeing Mom and Chad squirm at the cobra show, I have never seen two people so ready to jump off a high wall of seats if necessary. I tried not to laugh, really I tried!

We ended our day at Hua Hin Safari and Adventure feeling lighter (an empty wallet is almost weightless) and happy.

All in all, I am happy that we got to experience both places, it was a wonderful week of elephants.

Have you ever been on an elephant trek? What were your experiences?

10 thoughts on “Elephants On Parade”