There are few things that are constant in this world. It is always changing and evolving, and we are always trying to destroy improve the earth around us. But in each place that we live or travel to there are constants. In Santa Rosa, California, my home town, there will always be beautiful vineyards and inflated home prices. In Taipei, Taiwan there will always be a chance of rain and slick marble sidewalks and entryways.

I was reminded of these Taipei constants again yesterday. Chad, Zoë, and I were on our way to the local big box store called RT Mart (the Walmart of Taipei). There was a typhoon forecasted for the next day and we needed to stock up on food items in case we were unable to leave the house for a couple of days.

Typhoons often hit Taiwan this time of year, it is called typhoon season for a reason, but very rarely are they much to worry about in the actual city of Taipei. Usually the coastal towns, such as Hualien, are hit hard and then the typhoon fizzles out before reaching the valley that is Taipei.

It was raining here in Taipei, as we made our way to the abysmal but necessary RT Mart, and I had dressed accordingly in black skirt, dark shirt and flip-flops. Or so I thought. Chad and I dashed from the taxi that dropped us off into the entryway of the store. Chad was pushing Zoë in the stroller and made it down a ramp to the basement entry without issue. I followed, going slowly because I started slipping and sliding in my flip-flops on the marble sidewalk well before the I had gotten to the stairs.

It is common place for businesses to “dress-up” their entryway with marble or slick tile despite the possible accidents that could happen because of the constant possibility of rain. It is something that my foreigner friends and I used to discuss often about the lack of common sense that sometimes abounds in Taipei. The marble tiles are not new to me, I know that this is a thing here in Taipei and I thought I was prepared.

I was not prepared. Chad and Zoë (thank God) made it down the stairs safely. I did not fare so well.

As I stepped on the top stair, I felt my foot slip out from under me. I was so careful, but obviously my flip-flops were the wrong shoes to wear that day. I think I yelped as I landed on my tailbone and proceeded to fall down the flight of dirty, nasty, wet stairs in front of about five locals and Chad and Zoë. It was not my most graceful entrance, and I definitely felt that flight of stairs more than any other in my life (this was my first time falling down stairs).

I laid on the stairs for a moment while Chad asked me questions, making sure that I was ok enough to move. I slowly moved all my limbs and joints, trying to ascertain if I had broken a leg, arm, or my back. The locals didn’t move to help, but tried not to stare, which I appreciated. I was ok, I was still alive!

As I slowly got back on my feet, I felt intense pain in my tailbone. I must have bruised it. Chad and Zoë asked me if I was ok. I held back tears as best I could because I didnt want to scare Z and said I was fine, just a little sore.

I have bruised my tailbone once before in a scooter accident. I also bruised it when giving birth to Zoë, so I am not unfamiliar with the pain, or how to take care of it. I guess I am pretty lucky.

I hobbled around while we did our shopping and since then have been doing the best I can to be normal with a bruised rear end, unable to sit or bend over without some pretty excruciating pain.

In all of this though I am thankful. I am so thankful that Zoë was in the stroller and not in my arms when I fell down the stairs. I am thankful that the typhoon did actually hit Taipei and I have had an excuse to sit (or stand awkwardly) around the house. Mostly I am thankful that I made it through a fall down cement stairs without breaking my neck or dying. I am thankful to be here, with Chad and Zoë, in this wonderful rainy city with marble sidewalks.

I am going to go ice my bum now and listen to the sound of heavy rain falling on our tin roof (there really isn’t a more soothing sound). What are the constants in your area? I love to hear from you, leave a comment and let me know!

Now that we are settled in Taipei  for a bit, Chad and I are trying to get our flickr.com photo pages up to date and labeled. This may sound like a pretty simple task, but think about how many photos you take in a normal day (I mean who doesn’t post at least one picture of their kid or meal on Instagram each day)… now multiply that times a million and you know now how many photos we have taken on this trip so far. Okay, so maybe I exaggerate a little. All I can say is that I am thankful that they are all digital, I would probably drown in them if they were actually processed photographs.

We sit and go through each set of photographs we have taken and try to choose the best ones. We upload the ones that we think will mean something or be interesting to those that are going to be looking. How does one choose what other people want to see? I have no idea, and by the end each photo set, I really don’t care. I just choose the ones that look halfway decent.

Then there are the descriptions and titles of each photo. I am not a witty person, and trying to think of new and fun things to say about each photo, well, I just hope people won’t expect too much. Captions stating things like “Zoë and a boat” will probably be common. But who really needs a full description on each photo anyways, right?

The point of all this work, is that at least our photos will be up for the world to see and everyone can share in our adventure even more. The digital age has been wonderful for us on this trip and I am so glad that we can show people what we have seen and that people can read here on this blog about what and how we are doing. Thank God for excellent technology.

Here are some of the pictures that will make it up on our flickr page. When it is up and ready for perusal, I will make sure to give you the link ASAP! Now I am off to choose some more photos to upload… only another 328,798 to go. 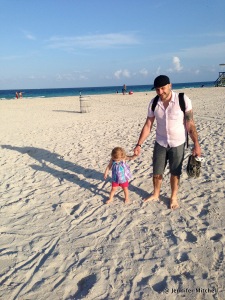 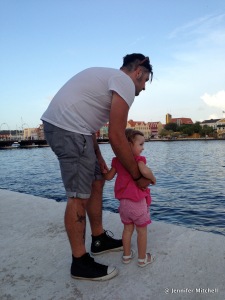 Chad and Zoë checking out crabs in the water, Curacao April 2013

Lisbon as seen from St. George’s Castle, Lisbon, Portugal May 2013 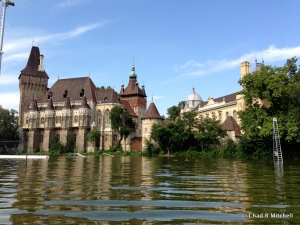 The three of us at the Parthenon, Athens, Greece July 2013 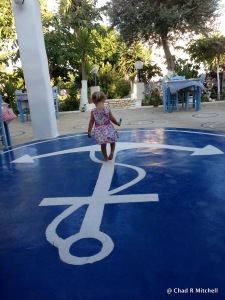 After we left Athens, we took a four hour ferry ride to the island of Paros in the Cyclades. We are now settled in a wonderful little apartment just a 5 minute walk from the beach! We found our apartment on airbnb.com and have fallen in love with it. It is called Betty Apartments, and Betty has been an amazing hostess. For one thing, she does our laundry! She also cleans our room everyday! It has been a real vacation so far for us. We have had very busy days consisting of brunch, nap-time (for Zoë, although there have been times I wished it was mine), time at the beach, dinner and then some relaxation after Zoë’s asleep. Chad works in the mornings and while Zoë naps and I do my writing or cleaning then too. This life is amazing! This trip is amazing, and I feel so very blessed to be here. God is good!

Zoë hanging out on our back porch

Chad and Zoë walking back to our apartment

We have been on the island now for 10 days. And as of two days ago, we now have a friend from Sonoma County staying with us! (We have tried harassing everyone to come and see us, but with the price of plane tickets these days…whew). Our friend, Nathan, has been traveling himself for the past half year or so. He was planning on being in Greece the same time as us, so, here he is! It has been so nice to see a familiar face thats not pixelated on skype or facetime. Both Chad and I have enjoyed having someone new to converse with, and hearing about his travels and what God is doing in his life. Hopefully, he is just as happy to be here as we are to have him here!

As it is whenever one has visitors, whether you are in your home or traveling, there are hiccoughs along the way, but the stories you will tell later about your time together will be even better because of them. For example, Zoë being over-tired at dinner last night and pushing her glass of water over so that Nathan had to make a quick dodge before getting deluged… well, that will be funny in the future right? And Chad getting the flu today and being bed-bound and unable to keep anything down except cola… we will laugh about that someday too.

God has impeccable timing for teaching us things that we didn’t realize that we needed to learn, and what I have learned in the past two days, is that I need to stop sweating the small things (I cringe at being so cliché…I’m sorry).

I need to see God blessing me with patience when Zoë screams as if I am water boarding her every time I have to wash her hair (we use tearless shampoo, the water’s a good temperature, I have tried every trick, she just hates washing her hair). I need to see that God is blessing me with a merciful attitude, when she accidentally punches me in the face while having a public melt-down. I need to see that everything around me, God has blessed to me. He has given me this opportunity to see the WORLD! I need to stop worrying about the small, insignificant things that will be forgotten or laughed at later and try laughing at them or forgetting them now.

How hard that is. When I have it down perfectly, I will let you all know. Until then, I will just keep trying and keep praying. God is good.

But the fruit of the Spirit is love, joy, peace, longsuffering, gentleness, goodness, faith, meekness, temperance: against such there is no law. Galatians 5:22-23